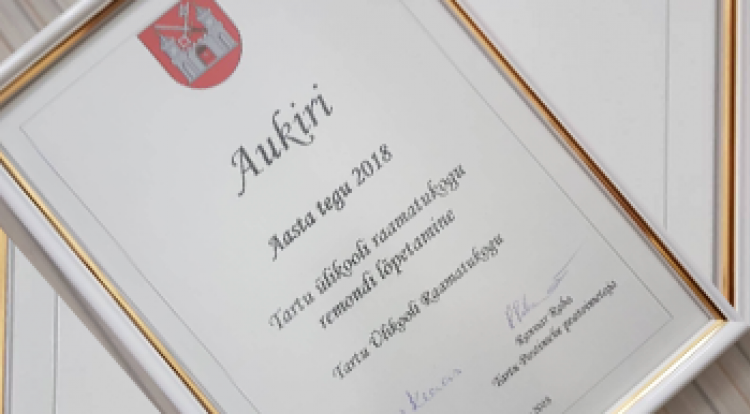 One of the ten nominees who received most votes in the competition “The Deed of the Year 2018”, organised by the Tartu City Government and the newspaper Tartu Postimees, was the completion of the UT Library renovation. The Letters of Honour were given to the nominees yesterday, on 27 December.

Tartu’s Deed of the Year was selected already for the 21st time. There were twenty-three different events, achievements and undertakings nominated as the candidates of this competition.

Rannar Raba, the Chief Editor of Tartu Postimees, stated at the ceremony that despite the rapid development of information technology, the library is still very important for us and not only students missed it sorely during the renovation period.

Raba said that it is difficult to put the phenomenon of the UT Library into words. “When talking to a student a couple of days ago, I asked him what makes the UT Library so special,” said Raba. “He told me that it is the general feeling of moral support that is in this building – knowing that you are not alone in your ‘sufferings’.”

The first renovated part of the library was opened to the readers in April and the whole building on 1 November. The renovation lasted a little more than two years.

The biggest number of votes in the competition for Tartu’s Deed of the Year 2018 was given to the Tartu Appeal and Emajõe kett (‘The Emajõgi River Chain’), as well as to other citizen's initiatives, which helped to end the specific development plan for the wood refinery (pulp mill).