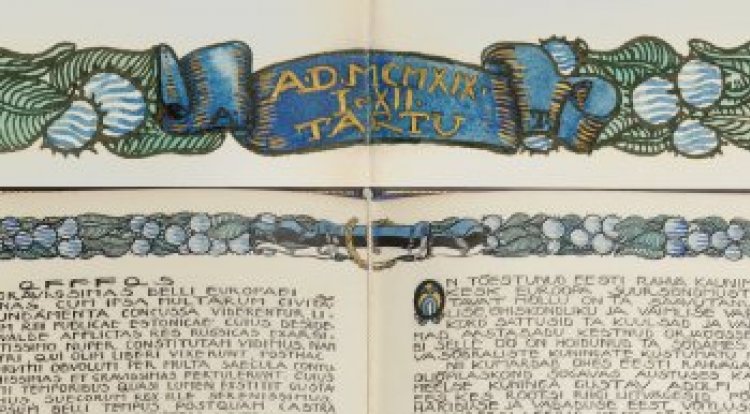 Two exhibitions dedicated to the 100th anniversary of the national university were opened at the Library on 22 November.

Citations of honour, sent to the university to mark its reopening as the Estonian-language national university on 1 December 1919 by various institutions and organisations, e.g., the Military Command of the Republic of Estonia, the Tartu City Government, the Estonian Doctors’ Society of Tartu and the University of Amsterdam, can be seen on the exhibition “1 December 1919”. The Mayor of Tartu, Urmas Klaas, read out the citation of honour sent by the Tartu City Government.

The exhibition also shows congratulations letters sent to the university by other institutions, as well as manuscript drafts of the University Statutes, media articles of the time and a poem written for the birth of the national university by the renowned Estonian poet Gustav Suits.

The visitors can also enjoy the web exhibition “Tartu University 1919–1940 Through the Camera”, introducing university lecturers, buildings, classrooms, lectures and events just as they appear on the photos of the time. The exhibition is based on the photo collection of the University of Tartu Library and includes more than 600 photos with descriptions.

The exhibition “1 December 1919” was compiled by Malle Ermel and Kadri Tammur, the web exhibition by Sulo Lembinen, all from the Department of Manuscripts and Rare Books of the UT Library. The exhibitions were designed by Lilian Mengel.

The exhibition “1 December 1919” will be open until the end of January.