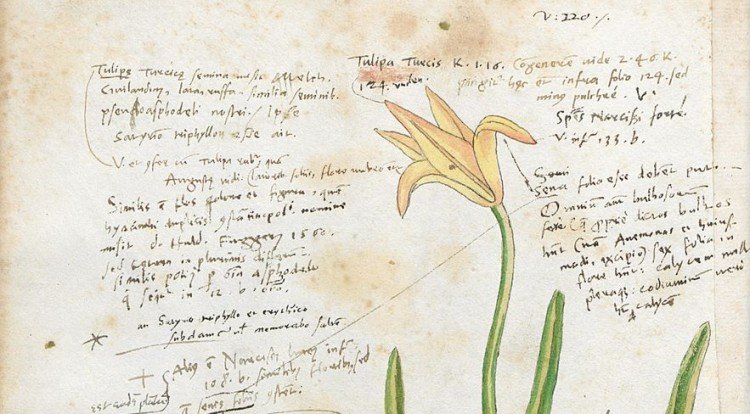 Conrad Gessner (16.03.1516-13.12.1565) was a notable botanist, zoologist, physician, pharmacist, theologian, philologist and lexicographer, bibliographer and collector. He was also a talented drawer, precise in details. Due to his varied contributions to the history of science of the early modern age, he has been called the Swiss Leonardo da Vinci.

University of Tartu Library lent for the exhibition one manuscript volume of plant drawings, which had belonged to Gessner and where some of the drawings had been made by Gessner himself.

Gessner was the first botanist to publish a description and a drawing of the garden tulip, which was introduced in Europe in the mid-16th century. To honour Gessner, the tulip was named Tulipa gesneriana. The exhibition includes a page of the book sent from Tartu, depicting an early drawing of a tulip.

In 1804, the UT Library bought three volumes of historical plant drawings, one of which has belonged to Gessner’s collection of plant drawings, and the other two mostly contain works by other botanists of the time. Reproductions of these wonderful drawings can be seen in the UT Library Calendar 2016 and in the book by the cultural historian and long-time library staff member Mare Rand Ajaloolise kultuurivara jälgedel: Konrad Gessneri taimejoonistused Tartu Ülikooli Raamatukogus, published by the library in 2016.