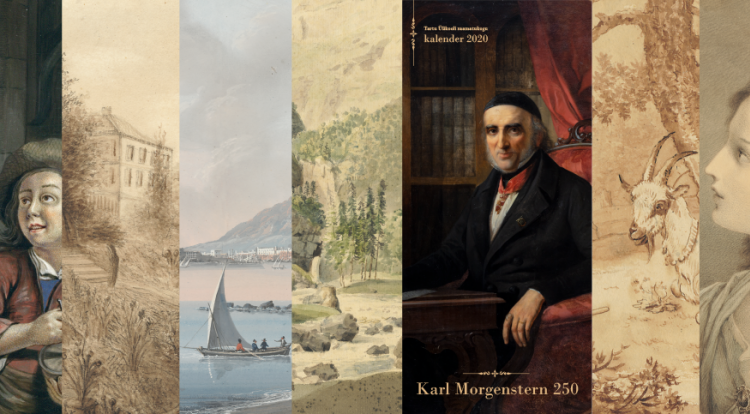 The University of Tartu Library Calendar for 2020 contains works from the art collection of professor Johann Karl Simon Morgenstern (1770–1852). The calendar album is issued to celebrate the 250th birthday of the first director of the UT Library and art museum.

“It is widely known that Morgenstern’s passion for art, collecting and also for drawing appeared quite early,” said the compiler of the calendar, Moonika Teemus from the Department of Manuscripts and Rare Books. “Having been influenced by his father, who liked to draw and collect paintings and drawings, Morgenstern started collecting works of art already during his school years. Our 2020 calendar features a selection from his art collection which he had developed all through his life.”

The most valuable part of Morgenstern’s personal art collection is formed by the collection of more than 100 paintings, which is known as having been the largest private collection owned by a non-noble person in Tartu in the first half of the 19th century. Most of the works of his paintings collection are now in Russia, where the properties of the University of Tartu were taken during the first World War, and are housed in the Art Museum of Voronezh.

Morgenstern’s collection of drawings has almost fully survived in the UT Library, containing exciting examples of the art of drawing of the 17th-19th centuries. The university also has several portraits of Morgenstern, made at different times.

The depiction of the bakery by the Dutch artist Willem Buytewech is the earliest work of art in the calendar 2020, dating back to the 17th century. The calendar includes also a drawing of a Sicilian landscape by Johann Wolfgang von Goethe and pictures by several 18th-19th century artists, like Franz Gerhard and Karl Ferdinand von Kügelgen, Carl Gotthard Grass and Carl Timolen von Neff, who were good friends of Morgenstern.

The calendar was designed by Lilian Mengel, works of art were photographed by Andres Tennus.

With its calendar for 2020, the UT Library continues the tradition of introducing its collections.

UT Library calendar can be bought at the Information Point of the UT Library and at the UT Library e-shop, UT e-shop, the UT museum, the UT Natural History museum and the bookshop Krisostomus.