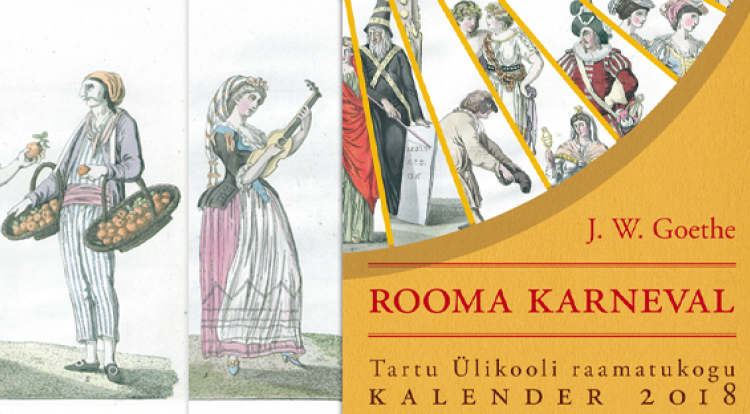 The University of Tartu Library Calendar for 2018 introduces the Roman Carnival as described 230 years ago by the great German writer Johann Wolfgang von Goethe (1749–1832) in his book Das Römische Carneval.

The illustrations used in the calendar come from the first edition of this book (Weimar; Gotha, 1789), a copy of which is held in the University of Tartu Library, which became a rarity already when published. 20 hand-coloured pictures were etched in copper by Goethe’s friend, the director of Weimar Art School Georg Melchior Kraus (1737–1806) after the drawings by Johann Georg Schütz (1755–1813).

“The illustrations of the book are manually coloured and its first edition was very limited, having only 250 copies,” said the compiler of the calendar Moonika Teemus. “It is known that even Goethe himself had some difficulties later in getting this book for his personal collection.”

Extracts from the Goethe’s book, translated by Ilmar Vene, appear in Estonian for the first time and provide an overview of the course of the Roman Carnival from the preparations until the last evening and the following day.

The descriptions by Goethe along with the illustrations by Schütz and Kraus offer a unique cross section of the characters seen in the carnival. Over the centuries, specific roles had developed: Advocate, Quaker, Fortune Teller etc. Inspiration for them was drawn from the characters of commedia dell’ arte, such as the irresponsible Pulcinella or the boastful Captain, as well as from ancient history and mythology. Local national dress and seemingly strange clothes worn by the endless flow of foreigners who visited Italy were used as suitable costumes.

The calendar was compiled by Moonika Teemus from the Department of Manuscripts and Rare Books of the UT Library, and designed by Eve Valper. The editors were Rein Saukas and Malle Ermel, English translation was made by Sulo Lembinen.

With its calendar for 2018 the UT Library continues the tradition of introducing its collections.  The last year’s Calendar Album contained a number of unique drawings, originating from the famous book Metamorphosis insectorum Surinamensium (Amsterdam, 1705) by the 17th-century illustrator and scholar of nature Maria Sibylla Merian.

UT Library calendar for 2018 is available at the loans service point at the UT Library and at the pop-up reading rooms (Veski 32), UT Library e-shop, UT bookshop, UT museum and the Student Council.