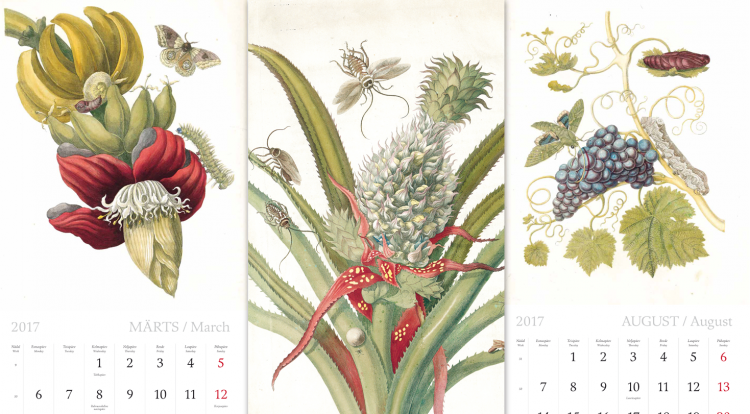 University of Tartu Library continues to introduce its collections and presents in its 2017 album calendar a number of unique drawings, originating from the famous book Metamorphosis insectorum Surinamensium (Amsterdam, 1705). The author of the book, the 17th-century illustrator and scholar of nature, especially insects, Maria Sibylla Merian, is considered to be one of the first ecologists of the world. Merian’s book has been reissued numerous times and it has been translated into many languages. The descriptions for the 14 images of plants and insects (translated by Vahur Aabrams), selected for the UT Library album calendar, are now first time published in Estonian.

Maria Sibylla Merian (1647–1717) was born into the family of the engraver and publisher Matthäus Merian in Frankfurt. Her interest in the life cycle of butterflies sparked at a young age. She began documenting the results of her observations by drawing; her first books on flowers and insects were published in 1675-1683. During the turn of the 18th century, Merian spent time in Suriname, a colony of Holland in South America, where she collected insects, their larvae and samples of plants they feed on in order to raise insects by herself and observe their metamorphoses. After returning to Holland she started to make preparations for her masterpiece Metamorphosis insectorum Surinamensium.

This book, illustrated with 60 coloured plates, testifies to her extraordinarily elaborate artistic gift and her observant scholarly nature. Exhausting descriptions of insects and reptiles are accompanied with lively remarks about their way of life.

In compiling this calendar, library specialists received help from Ando Truuverk, a doctoral student of the UT Chair of Entomology and a staff member of the UT Natural History Museum, who said that he had been surprised to learn that the library had a copy of Merian’s book, published in 1705. He was happy to be able to work with this wonderful and valuable book, whose illustrations had attracted attention already at the time of its publication. Although he had visited the neighbouring French Guiana, and had some knowledge about the insect fauna of the region, he had never visited Suriname.

The editor of the calendar Moonika Teemus said that the hand-coloured engravings of the copy of the Dutch-language book, held in the library, had been made using the contre-épreuve technique, where the prints are made not on the printing plate, but by using a freshly printed copperplate print. Teemus explained that this technique helps to avoid the characteristic lines of print plate edges, and the drawings come out softer and more delicate. Due to the time-consuming printing process, such copies of the book are even more rare and valuable. There are only 13 known copies of Metamorphosis insectorum Surinamensium with the hand-coloured contre-épreuve technique prints in public libraries of the world, said Teemus.

The copy of the book held in the UT Library is accessible in the digitised form on DSpace.