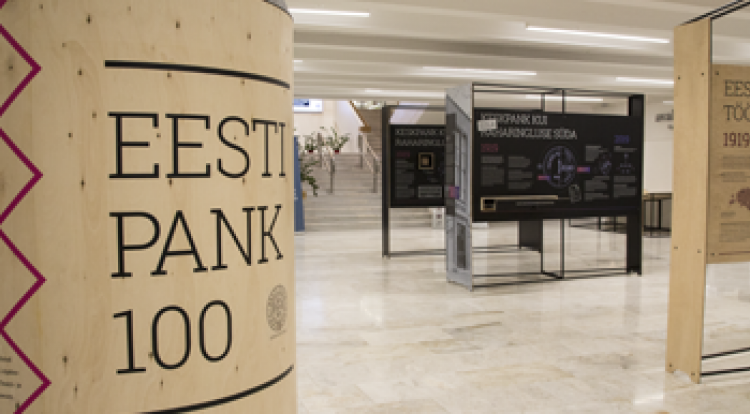 The travelling exhibition for the centenary of Eesti Pank is now in the library of the University of Tartu. The exhibition uses contrasting examples to tell the story in simple terms of the changes over a century in the purchasing power of the people of Estonia, and how money moves between people.

The exhibition is designed in the form of the buildings of the central bank, showing the historical buildings where Eesti Pank started operations a century ago and still works today. Historical exhibitions usually take a chronological approach, but the Eesti Pank travelling exhibition shows contrasts between things now and a century ago.

“One of the main goals of the work of the central bank has always been to maintain the purchasing power of money. The exhibition shows what it was possible to buy with the average wage in the 1930s and today”, said Siiri Ries, the curator of the Eesti Pank museum. The exhibition shows how over the course of a century, very many things have become much cheaper, but some have become more expensive because the prices of products or services depend on the number of hours of work that have gone on them, or the technology used.

It is the job of the central bank to organise the circulation of cash and to promote payment systems. A hundred years ago cash was mainly transported by the postal network, which in many places was conveniently linked to milk transport, so the milkman carried alongside the milk an envelope of cash and took it to the Post Office, from where it was sent onwards. Such cash deliveries could take a week or longer to arrive, while today we have instant payments that allow money to be transferred within 10 seconds any time of the day and any day of the week. Over 800,000 card payments, which were obviously completely unknown a hundred years ago, are now made every day in Estonia. People in Estonia pay by card four or five times as often as people in, say, Germany or Italy.

The Eesti Pank jubilee exhibition will be up in the library of the University of Tartu until 30 January.